Unzip the package to a folder of your choice. The folder contains a subfolder Lib which contains the precompiled DCU eg. OBJ files for each supported version of Delphi and C++ Builder. Add the appropiate folder to your library path and install the contained package dclDDObjects within your IDE selecting Component|Install Packages. A new tabsheet labelled DDObjects, containing six new components, should appear. If you have any problems in proceeding these steps, check your library- as well as your windows searchpath which should include the directory containing the package files.

We’ll start defining the interface for the class we would like to implement. For the sake of simplicity we’ll define three simple methods only:

Select File|New|Other, select the tabsheet labelled ‘DDObjects’ and doubleclick on the contained icon (DDOWizard) to run the integrated wizard. Within that wizard, provide an appropiate name to be used for the classname (we’ll assume the name ‘DemoClass’ as an example) and add these methods along with their parameters and types as shown in the following screenshot.

Leave the checkboxes labelled ‘Stateful’, ‘Cached’, ‘Callback and ‘Async’ unchecked and don’t change the value for ‘TimeOut’. These settings are not relevant at the moment and will be discussed in an advanced tutorial. Select a directory where this information (expressed in XML) and the generated sources should be stored.

Generating the sources is as easy as clicking a button. Click on the corresponding button and wait a few seconds. You’ll be notified as soon as the wizard has completed its task. The wizard will generate two units whose names will depend on the classname: uDemoClass_Proxy.pas will be included within the client, while uDemoClass_Stub.pas will be included within the server. These units contain the classes that implement the previously defined interface.

We’ll build the client first as this is fairly straightforward. Create a new application and construct the main form’s GUI. Once you are done add the unit which has been generated earlier (uDemoClass_Proxy.pas) to the application and use it within the form’s code. Select the tabsheet labelled ‘DDObjects’ within the component-palette and drop a DDORequester on your form as shown in the following screenshot: 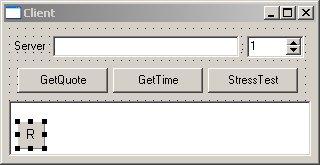 Some settings and events of the component (e.g. server and port) can be configured using the Object Inspector. We’ll leave all settings at their default values and do not add any events for now. Create an instance within the OnCreate handler of the form, and free it within OnDestroy:

All that’s left to do is to use this instance within the application. The button labelled ‘GetQuote’ in the above screenshot has an event handler associated with it that calls a method of the object. This call will be sent over the network and executed by the server (which we’ll create in the next section); the server then sends the result back to us. All this is done within a single line of code:

Let’s start creating the server. This is not much more complicated than creating the client. However, advanced issues and scenarios dealing with multi-threading can be a challenging subject of their own. Although the server does use several threads to perform its task, this tutorial does not deal with these issues.
Create a new application and construct the main form’s GUI. Once you are done add the unit which has been created by the wizard (uDemoClass_Stub.pas) to the application and use it within the form’s code. Select the tabsheet labelled ‘DDObjects’ from the component palette and drop a DDOListener onto your form as shown in the following screenshot: 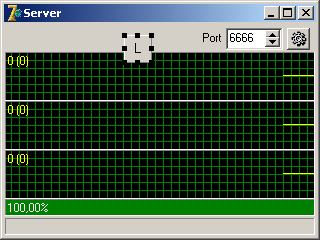 Open the unit uDemoClass_Stub.pas and locate the following snippet of code. Note that the class inherits from the abstract class TDemoClass_Stub which is defined and (partly) implemented within the same unit.

Copy the provided code to the form unit, press CTRL+C to perform code completion, and implement the methods as appropiate. Note that instead of overriding the constructor, the class offers a virtual method called Initialize which should be used instead.

Once a client calls the method GetQuote on the proxy (as shown in the client code above), the call will be sent over the network, received by the DDOListener component, forwarded to the implementation in TDemoClass and finally sent back to the client which receives the result. You do not need to implement any specific code for this, as it happens automatically.

Some very simple steps are missing before we can use the server. Firstly, the DDOListener we’ve dropped onto the form needs to know about the newly created class. We do this by registering it:

Finally the server needs to be activated:

The component offers several events which can be hooked into. The following code snippet shows one of these handlers which is triggered whenever an exception is raised (which happens from time to time in our deliberately faulty implementation of TDemoClass.GetQuote):

Build both projects and start both the client and the server application. If both applications run on the same machine and port 6666 is available, you can start immediately as those are the default settings. Otherwise you need to select an appropiate port within the server application and configure host and port within the client application accordingly. Start the server by clicking the appropiate button.
The server contains a simple form which offers some basic logging facilities, showing the requests and results as they happen. Note that this slows the application down, so you can turn logging off. The client application contains several buttons, which will call the corresponding methods of the proxy and show the receive resuls within a memo.